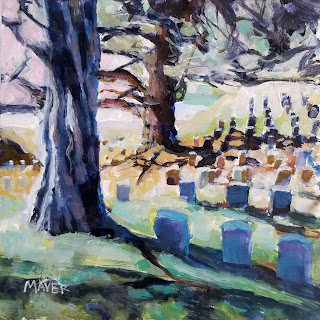 6" x 6" Acrylic on Gesso board
These are headstones located in the Vicksburg National Cemetery from the Civil War.

Vicksburg National Cemetery lies on the ground once manned by the extreme right of Major-General William T. Sherman's XV Army Corps, facing the extreme left flank of the Confederate defenses situated on high ground to the south known as Fort Hill. Embracing 116 acres it is the final resting place of 17,000 Union Soldiers, a number unmatched by any other national cemetery. The cemetery was established in 1866 and burials began in early 1867. Soldiers buried here had originally been interred in scattered locations throughout Arkansas, Louisiana, and Mississippi during the campaign for control of the Mississippi River.

Upright headstones with rounded tops mark the graves of known soldiers. Small, square blocks, incised with a grave number only, designate the unknown veterans, and a few graves are marked by other than government-issued headstones.

So do not fear, for I am with you;
do not be dismayed, for I am your God.
I will strengthen you and help you;
I will uphold you with my righteous right hand. - Isaiah 41:10
Posted by Margaret Mayer at December 04, 2019

Watch each step of painting this pet portrait here: https://youtu.be/7AMCcMp3MaQ 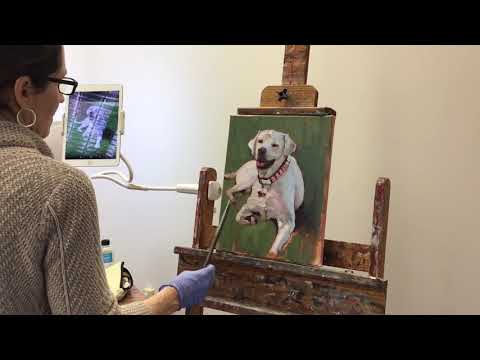